Charting course for the third industrial revolution,President Associationof Indian Universities (AIU) Prof PB Sharma has called for a serious thinking on engineering and technology of tomorrow, observing it will veer around convergence of communication and renewable energy technologies.

Prof Sharma, an eminent educationist and Founder VC of Delhi Technological University says In such an industrial revolution, there is a strong possibility of realizing the dream of mass-entrepreneurship, sustainable habitat and establishing the vital harmony with nature while at the same time keeping the momentum of growth and development to manifest the promise of a happy and healthy life to the billions of people around the world.

This requires our commitment to pursue the cause of Frugal Engineering to gainfully utilize the enormous power of innovation for the benefit of millions of our people in the world. He recalls on January1, 2016, the 17 Sustainable Development Goals (SDGs) of the 2030 Agenda for Sustainable Development was adopted by world leaders in September 2015 at the historic UN Summit  officially came into force.  Over the next fifteen years, with these new Goals that universally apply to all, countries are ordained to mobilize efforts to end all forms of poverty, fight inequalities and tackle climate change, while ensuring that no one is left behind.

The SDGs, also known as Global Goals, build on the success of the Millennium Development Goals (MDGs) and aim to go further to end all forms of poverty. The new Goals are unique in that they call for action by all countries, poor, rich and middle-income to promote prosperity while protecting the planet. They recognize that ending poverty must go hand-in-hand with strategies that build economic growth and addresses a range of social needs including education, health, social protection, and job opportunities, while tackling climate change and environmental protection.

We need to cause new sciences and the Engineering of Tomorrow to achieve these SDGs with clarity and certainty. We can do it now that the power of science and might of engineering is ushering a new dawn, giving us new hope and creating an environment of growth with sustainability.

Science and Engineering have been the prime movers of growth and advancement of human society from time immemorial. Right from the early dawns of civilization on planet mother earth the man got excited with the magnificence of nature, got thrilled by the powers of nature and got attracted to the vast diversity and beauties of the Universe. The genius of man understood the value and worth of the power of science (vijnana) and the might of technology which the creator utilizes to create and sustain this magnificent creation. The love for science lead the mankind to discover the secret of life, unveil the wisdom of nature and create new engineering and technology to sustain human life with ever-advancing frontiers of growth and development.

We have come a long way from the invention of fire and wheels of power to the excitement of info-Nano-bio revolution exciting the imagination of man to scale the hitherto un-scaled frontiers of science and engineering and tackle the monumental problems of waste, inefficiency and agility of human endeavors involving science and technology.

Engineering itself has come a long way from being an articulation of human capabilities to a science based engineering thriving on the capabilities of modeling, simulation, virtual proto-typing and assessment of its design objectives well before it is translated into the realms of engineering and innovated technology products and services.

In turn it has marched forward from macro to micro, micro to Nano and tomorrow shall move from Nano to Pico. Micro and Nano machines, micro and Nano mechanisms, Nano molecule based engineering systems for drug delivery, Nano robots for surgery, mind to mind communication, wireless transmission of electricity, capability to convert energy into matter along with already existing capabilities of matter to energy, breaking the barriers of Cornot Cycle for energy to work output and above all the capability to negotiate the forms and structures of materials, embedding a lot of intelligence in them to monitor, analyze and communicate to the control systems with integrity and security will unfold and altogether new world of science and engineering in the years to come.

He was confident that Fellow professionals of engineering fraternity and our bright budding engineers rolling out of prestigious colleges and universities under the patronage of their inspired and dedicated teaches shall deliver the promise of creating a new India, India of our dream which shall touch new heights of glory of sustainable prosperity, creating abundance of growth and development yet protecting the interest of man and Mother Nature.


On the material front also we have done remarkably well initially to understand the materials and minerals, then alloys and composites and now whole lot of new materials are being created on the strength of Nano-bio combinations. The advent of smart and intelligent materials and composites are giving a new hope for engineering of tomorrow which shall thrive on the advancement in the areas of new materials. This will give rise to new methods of design and analysis and shall promote new manufacturing systems which shall cut down heavily the losses and waste currently created in engineering and technology product manufacturing and services.

The dream of “Zero Waste Engineering” is likely to become a reality with the growth of new and advanced materials and manufacturing systems. Our capabilities of recycling and reuse much of the waste which we produce in engineering and technology production systems shall also yield rich dividends in future now that we have understood both the Physics, Chemistry and Biology of Engineering and Technology much better than ever before. We can now look for a day when we shall segregate and digest the waste in a manner that we crack the vital chain of Carbon and Hydrogen and send Carbon to Carbon and Hydrogen to Hydrogen, likewise Sulphur to Sulphur, Cadmium to Cadmium, Phosphorous to Phosphorous from the enormous waste coming out of our industrial systems and effluents.

But then, the prime question is whether engineering by its infinite innovation power should target itself to serve the elite few or a billion people of our country and around the world and that too assuring highest compliance of sustainability, protecting natural environment, maintain excellent health of the environment and that of its people and in fact of all creatures created by the God almighty.


We need to focus more and more on engineering of tomorrow that will create a bigger “Value for Many” in place of “Value for Money” as has been rightly said by Dr. R.A. Mashalkar in one of his presentations made for TEDx.


Engineering and Technology are known to be the friends of people as they have made the mankind move on the wheels of power, provided amenities and services to live a happy and comfortable life, and created work opportunities for millions and fostered businesses and enterprises around the world. However, the misuse of science and ill-effects of technology also have raised monumental concerns such as the threat to human existence created by the terror of climate change, rapid depletion of natural resources, destroying the vital support for human habitat of forest cover and destroying the nectar of nature which was flowing in the form of divine rivers in this country, now turned as the rivers of poison. 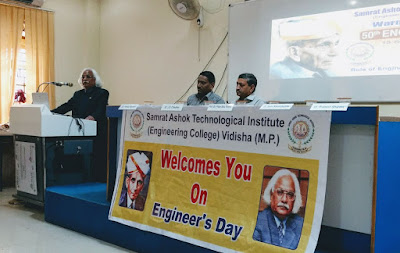 The unabated exploitation of nature which invites nature fury such as the recent one in Kedarnath in Uttarakhand are some of the highly disturbing features of ill-effect of our modern growth and development patterns powered by the advancement of science and technology.


Dr Sharma, who is  currently VC of Amity University says that he is happy to say that he  belongs to a World Class  University where we are building up such layers of frugal engineering in our R&D goals by engaging into low cost water technologies, solar energy research for empowering millions of rural people, low-cost health diagnostics systems and development of new and smart materials and engineering design systems to support the cause of engineering and technology creating a bigger value for many in the coming years.


He said they are building up such layers of frugal engineering in our R&D goals by engaging into low cost water technologies, solar energy research for empowering millions of rural people, low-cost health diagnostics systems and development of new and smart materials and engineering design systems to support the cause of engineering and technology creating a bigger value for many in the coming years.


He said their efforts at DTU  of designing the First Hybrid Car of India in 2005, First Unmanned Aerial Vehicle of India winning the “Most Innovative Design Award” in 2006 at AUVSI International competition in US, the pioneering work on design and development of Bio-diesel reactors, the first liquid nitrogen propelled car in 2007, the first Solar Passenger Car of India flagged off by the President of India from Rashtrapati Bhawan in September 2012 and our commitment to generate a third of the total electrical power from solar – wind and biomass for our campus and making our campus self-sustained for water needs are some of the finest examples of our commitment to future engineering and technology endeavors to serve the cause of the society and the nation.


“We are seriously engaged in these and a number of other highly important areas of R&D at Amity University in our quest to drive the addenda of Relevance Driven Excellence for our R&D. I am also delighted to share that Amity University Haryana, AUH where I am currently Vice Chancellor has received the prestigious LEED Platinum Category Certification for Leadership in Energy Efficiency and Green Building design, operation and maintenance.”

Porf Sharma  was speaking at a function organized on the eve of Enginners Day,at Vidisha.He paid homage to Sir Vishveshwariah  and asked scientists to take pledge for ushering a new era of science based engineering to serve the cause of Engineering of Tomorrow to serve the agenda of Growth and Sustainability.

Popular posts from this blog

January 07, 2016
"Anything But Khamosh " is the Biography of Yester years Silver screen popular star  Shatrughan Sinha,currently the ruling BJP MP from Bihar,the Northern India’s Crucial Hindi heartland state.The Book is released this week  with fanfare.  The befitting  title is reminiscent of his famous filmy dialogue on which he mastered over years and it became his brand .During electioneering too the Star of gone-bye era make delivery of the word many times and draw  repeated claps.    Unfazed by subtle bids to silence his vociferous opposition to the Narendra Modi government  Shatrughan cleverly deflects shots of those opposing him.His acidic tweets which do not spare high and mighty in the power corridors   are always talk of the Town, especially news rooms but no action was initiated against him by the party he keeps on daring on vital issues significant for the organization’s health. His party colleague and BJP MP from same state Kirti Azad is not that clever stroke play
10 comments
Read more

August 27, 2017
In era of disruptive technologies, A proposal has been mooted to apply disruptive interventions in realms of higher education to spot Albert Einsteins among millennials to confer doctorate degrees to them for innovations and researches rather than pumping huge resources for academic researches mainly aimed at career enhancements. Indian Universities should now onward pay a much greater attention to Quality and Relevance of Doctorate degrees, and not just the numbers, to empower India with the knowledge and technology power to achieve both global esteem and national development goals- eminent educationist Professor PB Sharma, President AIU said while addressing the World Doctorate Day on Friday (25 th August, 2017) at Jawaharlal Nehru University, JNU Delhi. “May be, we in India are at an opportune time in our universities to redefine the meaning of doctoral research in the “age of miracles and disruption”. Make no mistake. Professor Sharma said that the greatest Sc
1 comment
Read more