The day after Diwali this year, when Delhi once again hit 999 microgram per cubic meter on air quality index (AQI) for its PM2.5, there was a  great concern voiced by press and media but, as always, no emergent measures, public advisory or immediate actions were  rolled out to mitigate the disastrous  levels of air pollution in the world's largest democracy, India, in its national capital Delhi and the NCR Region. Life and business as usual continued.

Recent Lancet study, published in local and world leading news papers, reported that as many as 9 million or more people each year are dying in the world due to pollution. In India alone this figure could be over 2.5 million (25 lacs) deaths per year, the study reveals. But did it set out a panic or creates a sense of urgency in the minds of those in government and in the corporate and citizens at large. The answer is no. 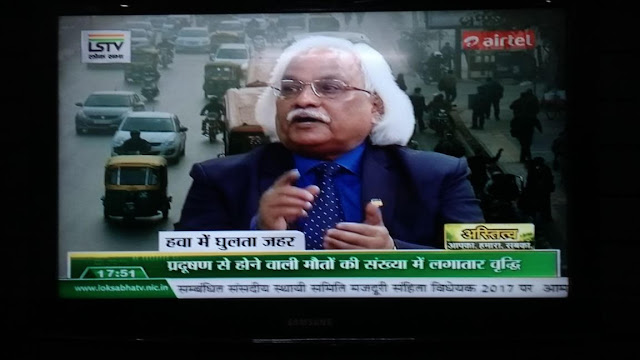 Last year also when AQI touched 999 in Delhi, eye brows were raised but nothing could deter the polluters from polluting the air to such an alarming proportion through out the year. The main causes of air pollution are identified as polluting industries,  dusty roads, flying dust from construction activity, polluting vehicles, traffic congestion on roads of mega and metro cities,  unabated burning of crop residue by farmers around Diwali and the burning municipal waste in the landfills among others. Undeterred by the environmental laws, these polluters continue to play havoc with the health of the Environment, and thus with the health of the people. With no concrete action plan in sight, the fear of outburst of epidemic, deadly viruses and increased deaths due to non communicable diseases such as heart attacks at early age, kidney failures, escalating asthma and cancer cases is looming large. 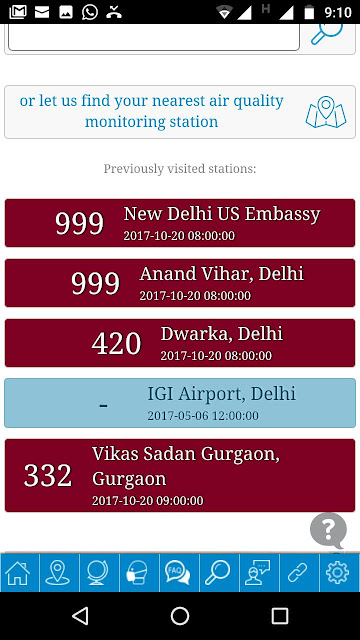 We need to seriously ponder over our responsibility to provide to our countrymen their basic right to breath fresh air  and drink fresh water, the two great medicines of the soul provided by God Almighty for all its creatures free of cost.

For this to be possible, we need to wage a war against air and water pollution, if we wish to create India of our dream, where we could breath fresh air and are able to revive our holy rivers which were once the rivers of nectar and divine bliss and which have now become the rivers  of poison because of our utter neglect and discharge  of untreated sewage and untreated industrial waste water directly into the rivers and water bodies.


As per IndiaSpend report 2016, of the 62000 MLD (million litres of sewage water per day), produced, only 18,883 MLD is actually treated as per the government data which accounts for no more than 30% of the sewage treated. A whopping 70% is discharged untreated directly into rivers and water bodies.

Water born diseases  cause a havoc, the worst hit are those living in areas were treated municipal water is not available. Domestic and hospital sewage contain many undesirable pathogenic microorganisms, and its disposal into a water without proper treatment may cause outbreak of serious diseases, such as, amoebiasis dysentery, typhoid, jaundice, cholera, etc. Metals like lead, zinc, arsenic, copper, mercury and cadmium in industrial waste waters adversely affect human health.
The prime question is what can be done? 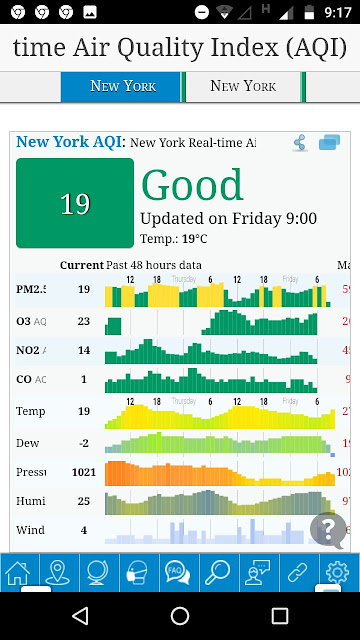 As for Air Pollution the environmental protection agencies should come heavily on the municipal bodies for not cleaning the roads, for their failure to implement an effective waste collection and disposal system, on polluting industries who are not having effective treatment of their gaseous and waste water effluents, The traffic management agencies which are currently doing no more than a lip service should come in full action to ensure lane driving, manage traffic jams more efficiently and implement intelligent traffic management systems as we can no longer afford the luxury of wasting our precious communing time on road and keep polluting the air any longer.

The traffic route planning in cities like Delhi need a revisit as there has been a sea change in traffic volume as against 1974 when the public bus transport route plan of Delhi was last revised. After all London and New York which were greatly congested due to traffic in 1970’s have been decongested by efficient and intelligent traffic planning, by segregating traffic, by installing synchronized traffic lights, traffic diversions during heavy rush hours and making certain roads one way traffic,  if not all the time , during rush hours.

A major break for vehicular pollution, however, will be there once the light motor vehicles, SUVs, Motor Cycles and Three wheelers all become electric vehicles and that the heavy vehicles passing through Delhi are bypassed through our peripheral roads. 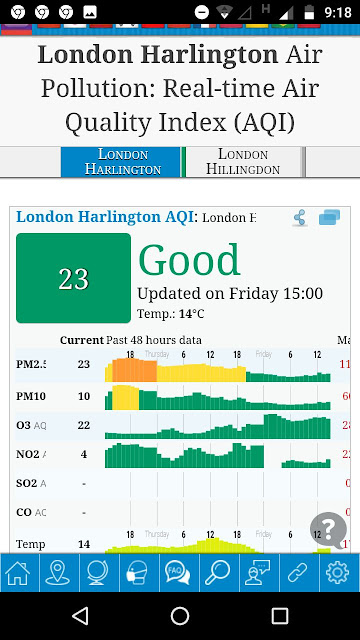 For Water pollution, likewise, the enforcement agencies should adopt a zero tolerance policy for treatment of waste water, both municipal and industrial waste water. It may also be worthwhile to create vast reservoir capacity for fresh water by creating underground storage under the river bed of large as well as small rivers while at the same de-silting the river basins for increased water retention capacity.

A blanket ban on lifting of sand from river beds has done a greater harm than good to the reservoir capacity of the river. The finest example is river Yamuna along Delhi that is reduced to a dirty drain except during rainy seasons !. Rain water harvesting in all university, colleges and school campuses and in all cooperative societies and large habitat be made compulsory to recharge ground water. But all these measures shall run short to assure water security unless water conservation measures are implemented with all sincerity both in the agriculture and the domestic sectors.

It is no surprise that the day after Diwali this year when Delhi Delhi was reeling under highly polluted air pollution, AQI hitting 999 in Anand Vihar and also in other places in Delhi, London and New York were smiling with AQI of 23 and 19. Incidentally the global standards ( safe limit) for AQI is 20 micrograms per cubic meter as against 50 that is considered to be safe in India.

The question is if London and New York can achieve and maintain air quality with in the safe limits why can’t we in India, given the standing of India as the Third largest economy and the science and technology prowess of India ?.
But the actions of the regulatory authorities alone shall have no success unless there is a determined political will and public support to the measures that directly affect the welfare and well being of public at large.

Air and water pollution being the major threats to the survival of the mankind, the universities in India are advised to seriously engage in solution research targeted to mitigate this national problem. Treatment of waste water, requires new science which like "science of nature" would be able to extract disolved gases, minerals and heavy metals like Lead and Mercury and thus facilitate design and development of pilot plants to extract Hydrogen from waste water and the wealth of minerals and metals.

Technologies for extractions of chemicals and toxins are also the need of the hour for solving the monstorous problem of waste water treatment. Likewise air cleaning technologies that shall help the polluting industries to clean their gaseous effluents effectively are required to be developed in the research laboratories of the universities in India. The universities should also adopt the villages , localities and industrial estates in the neighbourhood and mount case studies and public awareness campaigns so as to create a sense of urgency for tackling the environmental issues well before they assume alarming proportions.

Unfortunately for a long time the interface between the universities and society and industries in India has been one of the weakest area and thus requires immediate and sustained attention.

Government on its part must invest heavily on funded solution research that aims at solving the environmental pollution issues, be it air, water or soil pollution. It makes sense to mitigate the environmental degradation rather than to pay a heavy price of its neglect later.

NOTE :This article has been contributed by Prof. PB  Sharma ,and I am carrying it on my blog to highlight environment issue . Views expressed in the article are of Prof. Sharma who is eminent academician, former professor of IIT, founder VC of DTU and RGTU, and currently  he is  VC Amity University , Gurugram

Popular posts from this blog

January 07, 2016
"Anything But Khamosh " is the Biography of Yester years Silver screen popular star  Shatrughan Sinha,currently the ruling BJP MP from Bihar,the Northern India’s Crucial Hindi heartland state.The Book is released this week  with fanfare.  The befitting  title is reminiscent of his famous filmy dialogue on which he mastered over years and it became his brand .During electioneering too the Star of gone-bye era make delivery of the word many times and draw  repeated claps.    Unfazed by subtle bids to silence his vociferous opposition to the Narendra Modi government  Shatrughan cleverly deflects shots of those opposing him.His acidic tweets which do not spare high and mighty in the power corridors   are always talk of the Town, especially news rooms but no action was initiated against him by the party he keeps on daring on vital issues significant for the organization’s health. His party colleague and BJP MP from same state Kirti Azad is not that clever stroke play
10 comments
Read more

August 27, 2017
In era of disruptive technologies, A proposal has been mooted to apply disruptive interventions in realms of higher education to spot Albert Einsteins among millennials to confer doctorate degrees to them for innovations and researches rather than pumping huge resources for academic researches mainly aimed at career enhancements. Indian Universities should now onward pay a much greater attention to Quality and Relevance of Doctorate degrees, and not just the numbers, to empower India with the knowledge and technology power to achieve both global esteem and national development goals- eminent educationist Professor PB Sharma, President AIU said while addressing the World Doctorate Day on Friday (25 th August, 2017) at Jawaharlal Nehru University, JNU Delhi. “May be, we in India are at an opportune time in our universities to redefine the meaning of doctoral research in the “age of miracles and disruption”. Make no mistake. Professor Sharma said that the greatest Sc
1 comment
Read more

September 21, 2017
Charting course for the third industrial revolution,President Associationof Indian Universities (AIU ) Prof PB Sharma has called for a serious thinking on e ngineering and technology of tomorrow, observing it will veer around co nvergence of communication and renewable energy technologies. Prof Sharma, an eminent educationist and Founder VC of Delhi Technological University says In such an industrial revolution, there is a strong possibility of realizing the dream of mass-entrepreneurship, sustainable habitat and establishing the vital harmony with nature while at the same time keeping the momentum of growth and development to manifest the promise of a happy and healthy life to the billions of people around the world. This requires our commitment to pursue the cause of Frugal Engineering to gainfully utilize the enormous power of innovation for the benefit of millions of our people in the world. He recalls on January1, 2016, the  17 Sustainable Development Goals (SDGs)
7 comments
Read more